skip to main | skip to sidebar

This year is sure full of kopi tiams coming out. Btw just for your info, when u order
"filtered water" in old town kopi tiam, its basically water that is filtered. :-) no scam there .
I notice there are "oxygen" water being sold in pharmacies, if you read some of my comments, just avoid buying such products. Just like those pin holes specs being sold in pharmacies, these products does NOTHING except to play on Malaysian's ignorance of science.
Posted by Narrow Road at 4:43 AM 7 comments:

Nowadays u can transform ur home pipe water to spring and mineral water for less than hundred a month.

Its amazing how illogical this is and I can only feel sorry for those families who sign up for it.
Only in malaysia can you pull off such an ad and not get the public lash and mr.d also managed to get a celebrity n food critic to recommend it . That shows how lack of credibility these celebs are.

I was listening to a popular english radio n was shocked to hear an ad about pills that can enlarge breasts. I wonder if our media is so irresponsible nowadays , this is nothing but scam .

Sometimes I can only look south n envy at how diff our kiasu neigbours are. If this trend goes on , I guess malaysia can be another nigeria and export scams .
Posted by Narrow Road at 1:30 AM 14 comments:

Aint you tired of Water Scams?

Sometimes i grow weary of reading pamphlets churned out by new water-product companies in Malaysia. What is really annoying are those that keep talking about "energy water" and "oxygen water".
Energy water as it turns out are nothing more than putting some minerals into the water, pretty much like mineral water ...minus the naturalness and goodness. If you put in salt also you can call it Energy water since it does differs in its conductive behavior.

Next we have Oxygen water by parties who claim that they put in a whole lot more of oxygen into the water and that kills cancer etc, certified by Jabatan apa apa. Utter nonsense, water is called H2o for a reason, not H2o2 or H203. Diluting more oxygen into the water is only useful if you are using ur lungs to breath water, else its useless. Total scam. They should try and sell this in the water Association or get certification of how useful the "oxygen" is in the water for health purpose and get their ass kicked.

This is also similar to the "phiteen" or whats that brand again, our famous shuttler wore the necklace soaked with Diluted titanium (and lost badly). Again, look up youtube and see how the "physical tricks" are used to con people into thinking that such stuff works. (btw u can get a cheap RM 5 phiteen in DAISO IOI puchong , it works the same, same story on titanium dilution, har har har)

The theory is simple. Lets take the weigh lifting demo for example.
1. A participant is asked to carry the weight of an object in a certain position of the arms. He found that is was hard.
2. The participant now is asked to wear this "brand" x necklace or ring or whatever u can think of.
3. The participant again now tries to carry the same object. He now finds it much easier to do so! So the "brand" must contains some power or a catalyst for power!

Rubbish! Here are the explanation :-

This trick works the same for performing certain position feats before and after putting on some craps. 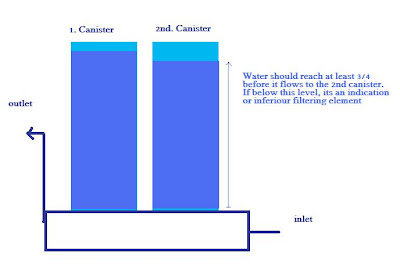 I notice by now that the normal white 0.5 micron Pensonic sediment filter (those cheap blocks that cost around RM 8) is better than those which you buy without brand.
In Carrefour for eg, i could get the a package of the "non branded" sediment filter for my twin filter for just RM 8 for 4 blocks. However its filtering is clearly inferior compared with the Pensonic ones, this can easily be demonstrated when you put 1 of the filter (y) to the twin filter that is nearest to the outlet and another "x" filter to the other one.
If you notice the water flows to the (y) and out easily before the "x" filter even reaches 3/4 of its level, that is an indication of very poor filtration, maybe its 0.20 micron or more.
Posted by Narrow Road at 3:34 AM 5 comments:

Pls read my first posting on the right side blog date list before u read any of these, else it wont make any sense to you

These are some images from the DIY installation in different setup.
So far the best double DIY filter is the Pensonic coupled with a panasonic. The PPM reading is around 18 compared to standard tap water here of 21.
If you are looking at those tap counter twin filter, get a pensonic. The other two brand i tried has quality problem, pensonic even provides an adapter for inner thread, something which i cant even find in a DELCOL rm 598 unit. Duh...but the Delcol unit remains to be tested, if you remove the "mineral" canister, u can get a discount from Delcol, the ceramic filter as the first filter is very interesting. Also the plastic container of the pensonic is clearly thicker and superior compared to Nishimen.

Let me re-iterate my advise :-
1. Do not use the carbon block that is provided in Pensonic or any other brand that is normally sold in Tesco, Carrefour, Jusco etc. Use BOTH sediment filter . Discard the carbon block.
Depend instead on the Panasonic Filter (refer to my posting on Twin filter + combo) which is purely carbon activated filter. So you join the output of the Pensonic Twin filter to the input of the Panasonic Filter.
Reason : ALL the carbon blocks i have tested and it INCREASES the PPM reading of the water even after days of using. Flushing for 20 seconds or so will bring it down but it wont even reach the level of PPM that you normal pipe water is. That means SOMETHING is diluted to the water from those carbon block and i dont know whether its some bad chemical or sugar from coconut carbon that most of these blocks are made of.

The new alternative that i am interested to look into is the Philips water filter, comes with UV and the double filter. The filter will cost Rm 120 but not so sure about the UV. This is a good buy considering the NSF rating is true unlike diamond/nesh. Basically what you have is Amway water filter equivalent with a fraction of its price.


Twin filter alone increases PPM due to the carbon block. 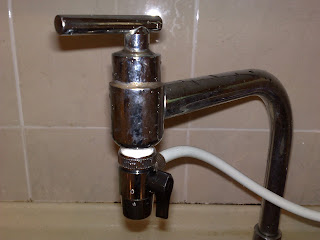 Direct the output of the twin filter (using both sediment filter) to the Panasonic as seen here: 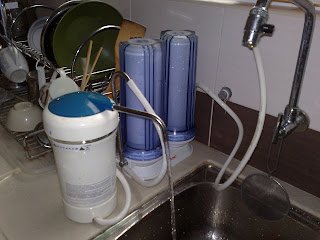 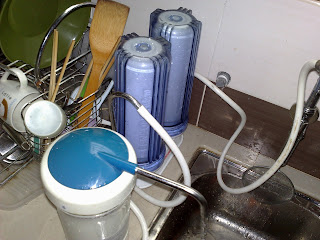 Finally, a trusted brand release a water filter that is decent price and does exactly what Amway water filter does, using UV + 2 filters.

I have not tested its ppm reading but from the NSF certification, definitely one of the best in Malaysia minus all the craps about energy water, clustering etc.
Posted by Narrow Road at 2:55 AM 10 comments:

As some of you already know, i myself use the everpure water filter.
After 1 year of using, here are my feedback :-

1. The first 2 filter, sediment and carbon as mentioned in my earlier post, is not from everpure. The local distributor here makes a cash in and labelled their own product with a misleading name. I have called everpure USA and they confirmed that there is no such brand name . If i can recalled its everwater or something like that.

Unfortunately despite (1), i still need those 2 filters since filtering common dirt is essential else the most expensive filter the S104 will be clogged up prematurely before its even do its job.

My complain on this filter system is :-

1. Ridiculous pricing on their website http://www.waterfilter.com.my/
You just need to check the pricing in everpure USA and you will know what i mean, even if you import it its cheaper. The price listed and sold in Malaysia for domestic use is too expensive.

2. Maintenance is hard. This is the part i struggle the most with. You need proper strength to turn the filter cap so that it does not leak. You also need white tapes to wrap around it. Funny though, one of my friend using it does not face this problem, so that means the quality of the container and caps varies.

3. Its ugly and dont install it yourself.
The 3 canister weight like a whopping elephant. So dont install it yourself like i did. Now it looks ugly in our beautiful new kitchen. And top this with item (2), i think i need to find another solution like reinstalling elsewhere . So i will probably reinstall it at the bottom counter (the right way) to the wall and pop-up the outlet via the sink.
Posted by Narrow Road at 6:20 PM 6 comments: